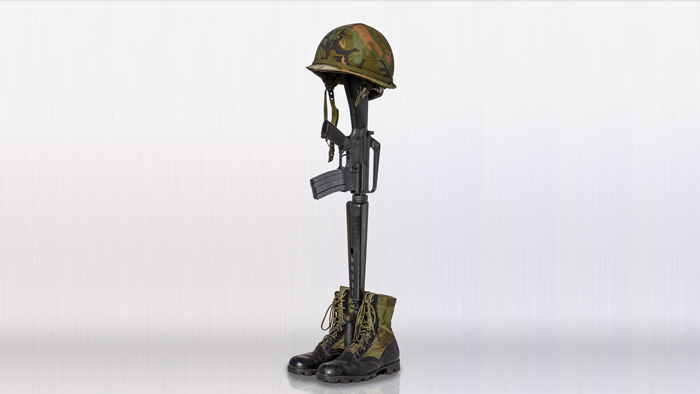 Honoring our veterans and their sacrifices is different for everyone. Sometimes it’s a simple thank you while standing in line behind a veteran at the grocery store while other times it’s a full blown parade on Veterans or Memorial Day. Cemeteries honor their veterans by placing small American flags at the headstones of the veterans buried at their cemetery. But for one cemetery manager, a dream has finally become reality at his cemetery.

Cemetery Manager Rob Given has been wanting a veterans memorial at the Brookdale Cemetery for years. The area of the cemetery didn’t even have a sign to let visitors know that the section of the property was designated for veterans and now they have a full Fallen Soldier Battle Cross monument on a three-foot pedestal, surrounded by seven flags–one for each military branch, the American flag, and the Prisoner of War/Missing in Action flag–and finished walkway.

This past Wednesday, members of the the Elyria Home Depot, lead by receiving manager and Team Depot Community Captain Kevin Hopkins, put the finishing touches on the site, including lining the walkway with decorative river rock, weeding the area, and putting down new mulch. Hopkins explained that Team Depot is a part of Home Depot that deals with community service and volunteerism, and that each Home Depot is obligated to reach out to the community and help whenever and wherever it can.

Safety Service Director Mary Siwierka estimates that the donated material and volunteer hours from the Home Depot team was between $3,000 to $5,000 and, because of their limited staffing, would not have been completed without their help. The Veterans of Foreign Wars Post 1079 donated the money for the large flag poles.

For more on this story by Lisa Roberson of the Chronicle-Telegram, click here.