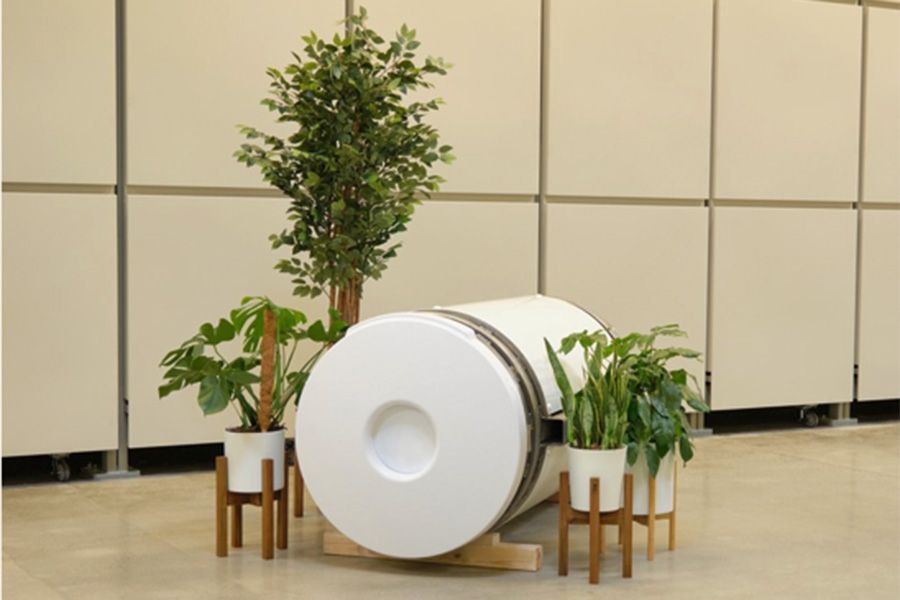 On July 1, Oregon became the third state in the nation to allow a human body to be composted after death, following Washington and Colorado. The new allowance has already brought a human composting company to the state, and represents a growing trend toward sustainability in the death care industry.

Distinct from traditional burial or cremation, human composting reduces all human remains, including bones, into a cubic yard of useable soil using a specialized mulching pod. The resulting soil can be used in a garden or donated to conservation efforts.

Oregonians looking to turn their remains into compost soil can now turn to Earth, a Washington-based human composting company that opened its first funeral home in Portland this month.

“I think Oregon is a real leader when it comes to making policy around this issue. State representative Pam Marsh has been an instrumental and a real champion of this work,” Morris tells Oregon Business. “This new law in Oregon is something that other states can look to if they’re looking for leadership and guidance on how to make this possible in their state.”

Tom Harries, Earth’s CEO and co-founder, wrote in an email to Oregon Business that his company has seen a 70% increase in overall inquiries since the law came into effect, and is already working with its first Oregon clients. Earth’s composting process costs $4,950 today, nearly half the cost of the average Oregon funeral service, according to the World Population Review.

In March of this year, the CEO of Return Home, another Washington-based human composting company, told KOIN 6 News he hopes to expand into Oregon in 2023.

Amercian’s interest in traditional casket funerals is waning. In 2020, 56% of Americans who died chose cremation over a casket funeral, a 23% increase from 2006, according to the Cremation Association of North America.

According to Rachel Essig, executive director of River View Cemetery in Portland and board member of the Green Burial Council, eco-friendly burial options are rising quickly to take a bite out of the traditional funeral model. She says millennial and Generation Z customers are driving the trend.

“We have a generation of Greta Thunbergs coming up who are extremely concerned about the environment. The death care industry will have to get its act together if they want to keep up with them,” Essig tells Oregon Business.

Essig describes her company as being the “old kids on the block” when it comes to green funerals. River View has offered natural burials — where a deceased person’s remains are put into the earth without casket or embalming — to clients since 2009. Essig says the process now accounts for one-third of her business.

Essig says current trends mean River View must continue to innovate. When her company’s crematory oven broke down this year, she decided to offer alkaline hydrolysis (also referred to as water burial or aquamation) options for clients, instead of buying another emissions-heavy incinerator. The process dissolves a body using alkali, is a quicker means of disposal than natural burial — and produces 90% less emissions than traditional cremation.

Essig has no plans to offer human composting to families, but she said that could change if demand for the process grows.

Keith Crawford, co-founder of Solace, a carbon-neutral, low-cost crematorium service based in Portland, says he doesn’t see human composting, natural burial, and other forms of eco-funerals as being in competition with one another. Like the plant-based food industry, he views the eco-funeral model as competing with the larger, less environmentally conscious business model.

“I think what [human composting] represents is a push towards doing things differently from the traditional model that was held by funeral homes for decades,” says Crawford. “We represent part of that push as well, just not just in the same way.”

Solace purchases carbon offsets to mitigate the emissions generated by its cremation process, and is certified as carbon-neutral by Carbonfund.org, a global sustainability nonprofit that certifies companies with a net-zero carbon footprint. Crawford agrees with Essig that says the arrival of human composting represents a much wider eco-friendly shift in the death care industry. One which funeral homes could all potentially have to adopt to satisfy demand moving forward.

“Body composting is brand new, and people are still getting comfortable with the idea, but it’s definitely going to become more and more popular with time and exposure,” says Crawford. “There’s a lot of good new energy in the space — really interesting innovation happening at the end of life in the industry at large, and not just in what to do with the body.”

He says customers are demanding more eco-conscious end-of-life options beyond how to dispose of human remains. He says biodegradable urns —as well as digital obituaries and online memorials — are also gaining traction as customers want their last act on earth to leave the planet unharmed.

Far from being direct competitors, Crawford says that the next stage of the green funeral movement is partnerships between companies that specialize in greening different aspects of the end-of-life process.

For the full story by Sander Gusinow, click here.