Saving the Environment — and Cash — Through ‘Green’ Burials 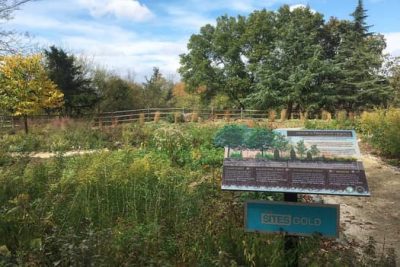 In 2017, Judy and Al Mowrer of Wooster, OH, decided they wanted to be “pushin’ up daisies” in the literal sense when they died – using their bodies to help the Earth prosper and give new life.

So last year when Al died of multiple sclerosis at 74, he was wrapped in a cotton shroud and buried beneath the prairie meadows of Foxfield Preserve in Wilmot, 20 miles southeast of their home. The conservation ground accommodates “green” or “natural” burials free of embalming chemicals, concrete vaults, and steel caskets.

“He is helping the environment grow more. I find it so peaceful, I’m out there all the time,” said Judy, 69. “I take fresh cranberries, shelled peanuts and sprinkle them on his plot so that all the animals from the forest can come visit him.”

“Back in the day, you’d bury your loved ones on your farmstead at home or at the little church next door, without the embalming or the vaults,” he said. “We’re seeing this resurgence of what we used to do.”

While embalming practices became the norm during the Civil War – something that allowed bodies to be transported home for burial – people are now choosing more traditional options, he said.

Three states – Washington, Colorado, and Oregon – have legalized human composting, a type of green burial that turns the body into soil using wood chips and straw to make it easier for microbes to break down tissue. And legislation is underway to add New York and California to that list.

According to the association’s 2021 Consumer Awareness and Preferences Report, 55.7% of those surveyed would be interested in green funeral options because of their potential environmental benefits, cost saving, or another reason.

While statistics on the number of green burials is limited, the Green Burial Council says there are more than 350 cemeteries that offer green burials in the United States and Canada. Even more do not require vaults.

The average cost of a modern funeral in 2021 with embalming and a metal casket approached $8,000. Though green burial costs can vary, they generally cost thousands less. Judy, for example, paid $3,000 for her husband’s plot – half of which was a tax write-off – and $100 for his cotton shroud.

Cost and growing concern about the environment, along with greater awareness of natural options, have driven the increase in green burials, says Caitlyn Hauke, PhD, president of the board of directors for Green Burial Council International.

The environmental impact of traditional embalming and burial in vaults and caskets is significant. The Green Council reports that burials in the U.S. use 4.3 million gallons of embalming fluid, about 20% of which is formaldehyde, methanol, and benzene. Caskets and vaults also release iron, copper, lead, zinc, and cobalt into the soil.

And while cremation is considered to be more eco-friendly than burial, the council says cremation uses fossil fuels to burn bodies at 1,900 F for more than 2 hours. The process also puts billions of pounds of carbon dioxide into the air, and crematoriums emit toxic chemicals into the air.

“It’s definitely something people are inquiring about more now, especially with climate change being at the forefront of conversation,” Hauke says. “A green burial also tends to be more personalized in a way, and there tends to be more family involvement. There’s more value and meaning.”

To read the full article by Lindsay Kalter, click here.