Conserving Jewish cemeteries, one stone at a time 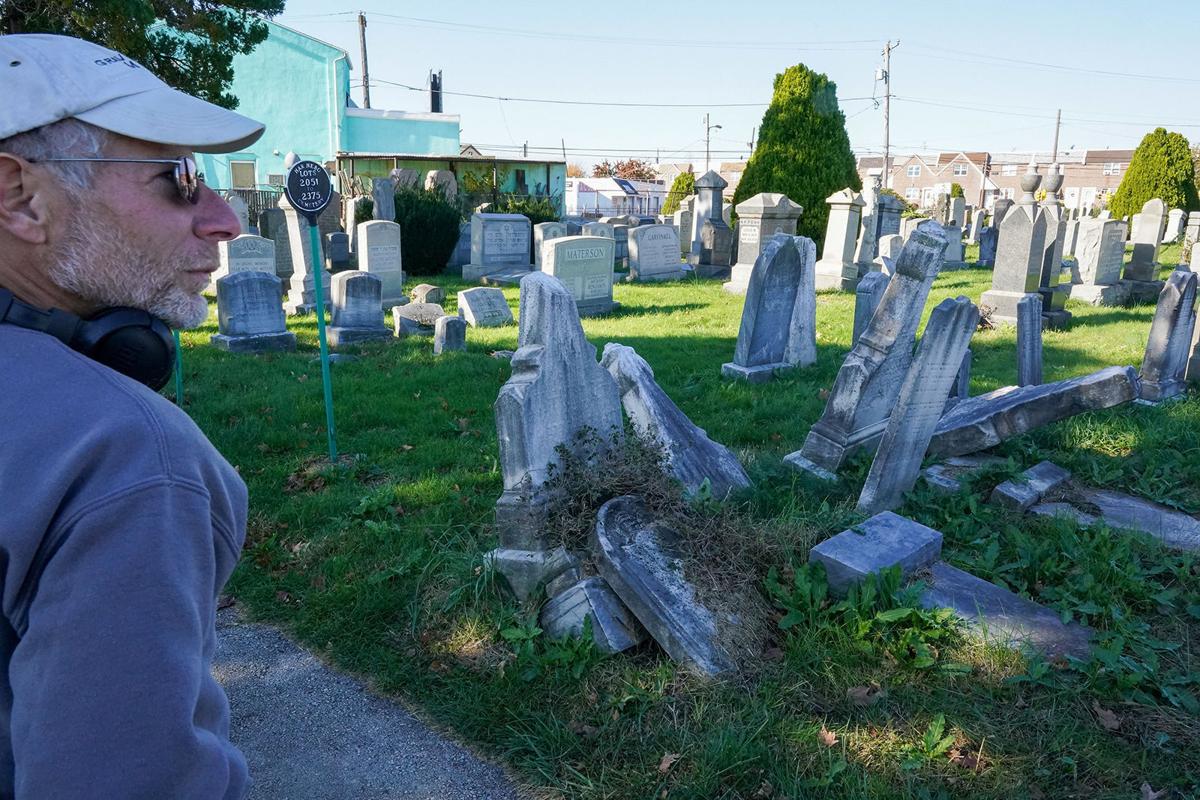 On an otherwise quiet morning at Har Nebo, the venerable Jewish cemetery in Northeast Philadelphia, the clinking of Joe Ferrannini’s hammer and chisel was the sound of history being made to last.

Ferrannini has been meticulously reassembling, resetting and cleaning the broken, sunken, fallen or discolored stones on 32 graves at Har Nebo. It’s a pilot project the Jewish Federation of Greater Philadelphia hopes will provide a conservation model for others among the 30 Jewish burial grounds in the city and the Pennsylvania suburbs.

“Gravestones may be the only record that someone was here on this planet, and preserving them is important to me,” Ferrannini said. “A big part of the mission is to make sure these people aren’t forgotten.”

Gravestones, he said, tell “the stories of why we are who we are.”

More than 34,000 people are buried at Har Nebo, the Hebrew name for the mountain that gave Moses his first glimpse of the promised land and became his burial place. The cemetery in the Oxford Circle neighborhood was established in 1890.

Rabbi Lance Sussman of Reform Congregation Keneseth Israel, who is doing research for a documentary project with filmmaker Sam Katz, said Philadelphia’s Jewish population grew from 12,000 to 200,000 between 1880 and 1920 as waves of immigrants arrived from Russia and Eastern Europe.

Some of those men and women, their children, and later descendants are among those memorialized by the granite and marble stones — some modest, others grand — that cover the 28 acres of Har Nebo.

“Ten of my ancestors are here,” said Richard Blumberg, 60, a Montgomery Township business consultant who was dismayed by the condition of the cemetery during a visit with his son in late 2020. While their family members’ graves were in good condition, Ferrannini estimates that a third of all the other stones are sinking, leaning, lying face down, or broken in pieces.

“Looking around, I thought, ‘I can’t accept this,’” said Blumberg, who’s been helping focus attention on Har Nebo ever since.

The Federation’s Friends of Jewish Cemeteries project has raised more than $15,000 toward a $20,000 goal to cover the cost of the pilot. On Oct. 17, a cleanup brought more than 350 volunteers through the gates on Oxford Avenue; they pruned shrubs, cut weeds, and filled 100 bags with vegetation and debris.

“We would not have gotten this far or this fast without Rich’s leadership,” said Addie Lewis Klein, a senior director with the federation.

“We get phone calls every single week from community members who are concerned about the state of our older cemeteries,” Klein said. “This is a community-wide problem. It needs a communal solution. And it’s going to take time, money and expertise.”

In 2017, the federation rallied support for Mount Carmel Cemetery, in the city’s Wissinoming neighborhood. About 275 gravestones had been desecrated by vandals, and Ferrannini led that successful conservation effort.

Mount Carmel and Har Nebo are both owned by the family of Richard Levy, who told the Jewish Exponent newspaper there were only 44 burials at Har Nebo in 2020. He did not respond to a voice mail or emails from an Inquirer reporter.

Surrounded by a chain-link fence topped with barbed wire amid the working-class rowhouses and apartments of Oxford Circle, Har Nebo does not appear to have been vandalized.

But unstable ground — the cemetery was built on the site of a factory that made bricks from the clay soil there — has caused many gravestones to tilt precipitously or fall over altogether.

“This can be dangerous work, and volunteers shouldn’t try to do it,” said Ferrannini, estimating that even a smallish granite stone can weigh 600 pounds.

Interest in Jewish and other burial grounds has deepened in recent years as the internet, and the availability of inexpensive DNA tests, have popularized genealogical research. Blumberg himself was inspired to visit Har Nebo while writing a book about his family’s history.

“Cemeteries are special places,” said Felicia Mode Alexander, president of the Jewish Genealogical and Archival Society of Greater Philadelphia. A self-described “history geek,” she grew up in Boston and remembers visiting the graves of family members in the historic Ohabei Shalom Cemetery.

“It was a goosebump experience,” she said. “When I walked among these headstones, I knew they were part of my gene pool, my ancestry. I felt connected to them.”

Cemeteries also create connections among the living. During the Oct. 17 cleanup, sisters Marci Green and Jane Bender were heartbroken to find the monument of their great-grandfather, Oscar Loeb, was lying on the ground at the family plot.

As the sisters stood there, Barbara Levine and Jeremy Rothman, whom they didn’t know and who didn’t know each other, walked over. The four engaged in the time-honored custom known as Jewish geography and quickly realized they are cousins. And all four returned to see Oscar’s stone repaired and reset in its proper place.

“It was emotional, thinking about our common ancestors knowing we were there, taking care of their monuments, and honoring them,” said Green. “Since meeting, we four have talked about reaching out and finding other relatives and having a reunion.”

Said Ferrannini, a lifelong history lover who learned gravestone work by doing it: “Three separate branches of the family were coming together around a stone I was able to reset for them and hear the story.

“It was gratifying on so many levels to take something that looked like a total loss and put it back to a better state so people can enjoy the artistry and the information on it.”

Dennis Montagna, a historian at the National Park Service’s Northeast regional office in Philadelphia, has been offering guidance and encouragement to the efforts at Har Nebo through NPS’ monument research and preservation program.

“Ideally with these cemeteries, you want there to be ongoing maintenance,” Montagna said. “But it’s like a perfect storm of deferred maintenance, expensive and labor intensive stonework to do, and very little income coming in.

“So, it really depends on other people to help retool these cemeteries as places to visit, and learn history. It’s a real challenge. But these monuments meant so much to people. They’re stories about … everything.”

To read the full story by Kevin Riordan, click here.