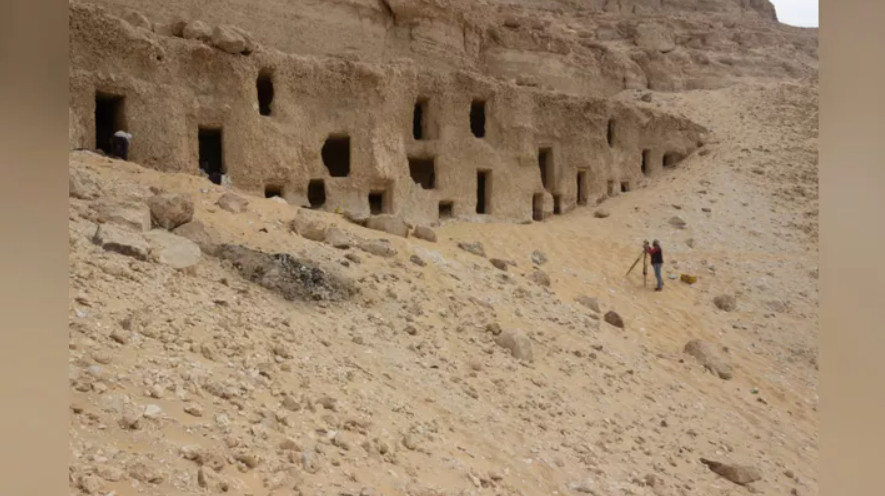 About 250 tombs, some with fancy layouts and hieroglyphics, have been discovered cut into a hill at Al-Hamidiyah cemetery to the east of Sohag, in Egypt’s Eastern Desert, about 240 miles (386 kilometers) southeast of Cairo, Egypt’s antiquities ministry said.

The tombs were constructed at different times in Egypt’s history, the archaeologists said in a statement from the ministry. The earliest were constructed about 4,200 years ago, at a time when Egypt’s “Old Kingdom,” as modern-day Egyptologists call it, was collapsing. At this time, the pharaohs of Egypt were losing control of the country, as a number of local governors gained power. Why these tombs were cut into the hill is not clear but it was not an uncommon practice in ancient Egypt.

The tombs in the cemetery that date to the end of the Old Kingdom tended to have more elaborate architecture that included an entrance corridor leading down to a gallery with a burial room located in the southeast part of the structure. The archaeologists also found pieces of limestone with hieroglyphic inscriptions in some of these tombs; they also discovered what may be the remains of plates that were placed as funerary offerings to tomb owners, the ministry said in the statement.

In one tomb that dated to the end of the Old Kingdom, archaeologists found paintings that depict the tomb owner slaughtering animal sacrifices, and people making offerings for the deceased, Mostafa Waziri, secretary-general of Egypt’s Supreme Council of Antiquities, said in the statement.

The latest of the tombs found in the cemetery date to almost 2,100 years ago, the end of what modern-day scholars call the “Ptolemaic Period.” At this time, pharaohs descended from Ptolemy I, who was one of Alexander the Great’s generals, ruled Egypt. Roman power in the region was growing around 2,100 years ago, and in 30 B.C., after Cleopatra VII died by suicide, Egypt became a Roman province.

The team discovered numerous artifacts inside the tombs, including cups, jars and plates — some of which were full-sized examples that may have been used in daily life, and others that were miniature vessels possibly used as symbolic offerings for the deceased, the ministry said in the statement. The tombs also contained painted spherical vessels that could have been used to store liquids. What was left of a round metal mirror was found in one tomb, and many of the tombs held both animal and human remains.

Research at the site is ongoing and more tombs may be found in the future, Waziri said.

For the full story by Owen Jarus, click here.