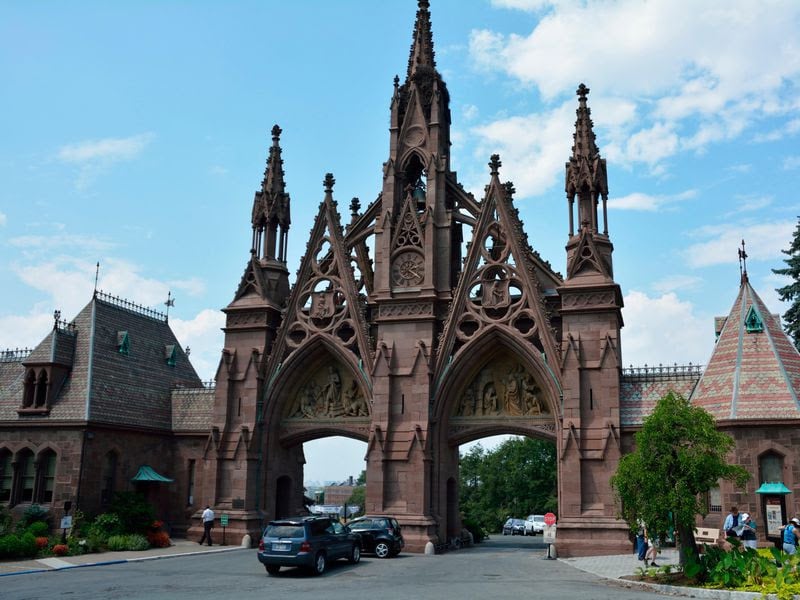 Now, the historic cemetery is inviting a living artist to seek inspiration among the dead. Per Katie White of artnet News, Green-Wood recently announced its inaugural artist-in-residence program. Interested parties can submit applications now through September 6; the residency will span nine months, beginning in January 2021 and ending in September.

The cemetery’s ideal candidate is a locally based, mid-career artist interested in developing a creative project that responds to the history of the space, reports Ben Verde for the Brooklyn Paper.

“Whether it’s the art, the monuments and the architecture, the beautiful landscape, or the history of the residents that are buried here and the history of Green-Wood itself, I’m excited to see what they’re going to focus on,” Harry Weil, Green-Wood’s director of public programs, tells the Brooklyn Paper.

The chosen artist will receive a $7,500 stipend and access to a private studio in the Fort Hamilton Gatehouse, a Gothic Revival building built in 1873.

Green-Wood—a National Historic Landmark—was incorporated in 1838 as one of the first rural cemeteries in America, according to the Green-Wood Historic Fund. More than 560,000 people are buried on the site, and as Andrea Romano observes for Travel + Leisure, it has long been the final destination of choice for many famous and wealthy New Yorkers.

Established during the “garden cemetery” movement, which sought to reimagine graveyards as public gardens, the 478-acre property boasts ponds, hills, and thousands of historical monuments and gravestones. The Revolutionary War’s Battle of Long Island was fought on the future cemetery’s grounds in 1776, making it a popular site for historical reenactments.

“Green-Wood and great works of art go together. Since opening in 1838, we have been a muse to artists of every discipline,” Green-Wood President Richard J. Moylan tells the Brooklyn Daily Eagle. “It’s not coincidental that Green-Wood was chosen as the final resting place by scores of 19th- and 20th-century artists—numbering over 400—including Asher B. Durand, John Frederick Kensett, George Catlin and Jean-Michel Basquiat.”

In 2017, Green-Wood debuted a public work by French artist Sophie Calle. Titled Here Lie the Secrets of the Visitors of Green-Wood Cemetery, the installation encourages tourists to slip secret-lined pieces of paper through the slot of a tomb-like structure. The obelisk-shaped object then empties its contents into a “grave.”

Other notable individuals buried on Green-Wood’s grounds include William Magear “Boss” Tweed, the infamous “boss” of Tammany Hall, who was laid to rest in 1878 after spending his last years imprisoned for corruption, and Susan Smith McKinney-Steward, who became the first African American woman physician in New York State after graduating at the top of her medical school class in 1870. McKinney-Steward’s tombstone reads, “Illustrious ‘through faith,’ as wife, mother, physician.”

Green-Wood’s artist-in-residence will gain access to the cemetery’s vast archives, which include correspondence from residents’ family members and memorabilia belonging to various artists, according to the Brooklyn Paper.

Weil tells the New York Daily News that he hopes the chosen artist will dig deep into the archives, as well as the site’s 182-year history, for inspiration.

“We have plot diagrams of where people are buried that offer insights to 19th century burial practices,” he says. “ … We also have books that listed what people died from—so an artist can even be inspired by diseases of the 19th century. We’re really keeping it open-ended in terms of the possibilities of what the artist can do here.”

For the full story by Nora McGreevy, click here.