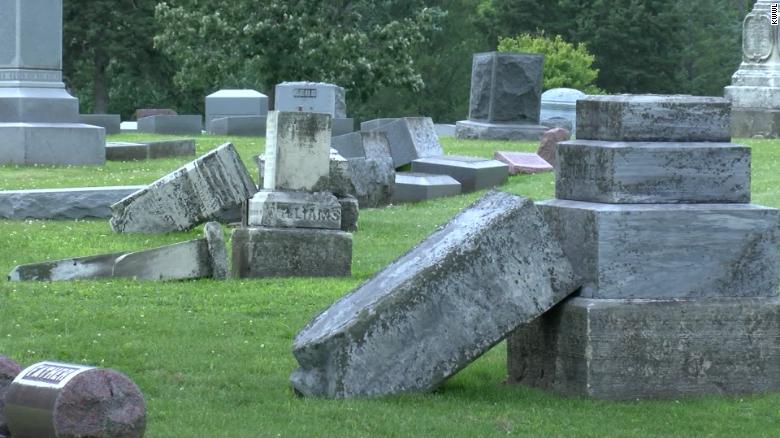 Staff at an Iowa cemetery met an unimaginable scene as they arrived to work on Tuesday morning.

The usually serene grounds of the historic Elmwood Cemetery in Waterloo were now a crime scene after dozens of headstones were found toppled over, and some destroyed.

“I was just sick to my stomach,” Mike Walden, president of the Elmwood Cemetery board, told CNN on Tuesday. “It just makes your heart hurt.”

The cemetery is home to graves dating back to the 1800s. It is even the memorial site for the first settlers that arrived in Waterloo — the Hanna family, according to Walden.

The Hanna memorial that was toppled over.

The Hanna Memorial, which is well over 6 feet tall, Walden says, was found knocked over. And the family’s two-month-old baby boy’s headstone dating back to the 1800s was pulled out of the ground and tossed nearby, according to Walden.

“It must have been a small group,” Walden said. “It’s a lot more damage than one or two people can do. Several of these would have taken four or five people to knock over.”

In total, 50 gravestones were tipped over, according to the Waterloo Police. The vandalism happened in the overnight hours between Monday and Tuesday, according to Walden.

He said most damage was done to the historic section of the cemetery. While they are still assessing, Walden says the damage is upwards of tens of thousands of dollars.

“It’s not like we are city-owned to get funds to fix this,” he said. “We will probably have to go to the public to raise funds.”

Waterloo police are investigating this incident and ask for anyone with information to contact them.

For the full story by Amanda Jackson, click here.