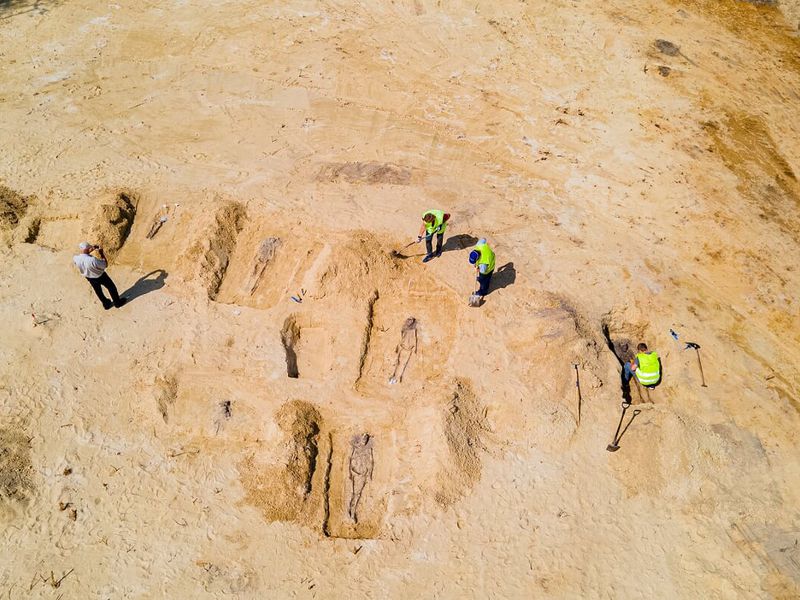 Construction of a road in southeast Poland has unearthed a centuries-old cemetery containing the remains of more than 100 children.

As Stuart Dowell reports for Polish media outlet the First News, archaeologists from Arkadia Firma Archeologiczna excavated the area following construction workers’ discovery of human remains. Between 70 and 80 percent of the skeletons found in the graveyard, which was likely in use from the late 16th century through the early 17th century, are children.

The find confirms local legends of a lost children’s cemetery in the woods. Most of the bodies were buried individually in an east-west orientation. But one grave contained four individuals—possibly siblings—positioned with their heads facing the same direction and their feet placed together, according to Gizmodo’s George Dvorsky.

“The arrangement of the skeletons, the state of their preservation, shows that the discovery is a Catholic church cemetery, which was certainly taken care of,” archaeologist Katarzyna Oleszek tells the First News. “No grave is damaged by another. The inhabitants knew exactly where they had graves and took care of them.”

Some of the deceased were buried with coins in their mouths—a practice that dates back to ancient Greece. Popular lore suggests the dead needed these tokens to pay Charon, the ferryman who transports souls across the River Styx, for safe passage. Those lacking a coin would be trapped between the realms of the living and the dead forever.

The coins represent the most compelling evidence of the cemetery’s age. Many were minted around the turn of the 17th century, during the reign of Poland’s Sigismund III Vasa, who ruled from 1587 until his death in 1632, writes Ashley Cowie for Ancient Origins. Others were minted later, during the reign of Sigismund’s second son, John II Casimir, who ruled from 1648 to 1668 and lost Polish territory to Ukraine, Tatarstan, Sweden and Russia.

The community that used the cemetery was probably “very poor,” Oleszek tells the Polish Press Agency, as quoted by Ancient Origins. Though the site was well maintained, the graves lacked commonly found burial artifacts like buttons, nails and coffin handles.

Written records dating to the turn of the 17th century note that the region—known as Góry Kościelne, or the Church Mountains—once hosted a large parish church with a garden, a rectory, a school and a cemetery. The archaeologists suspect that the newly identified site may be a section of the cemetery dedicated specifically to children; a yet-to-be found area may house adult members of the community, reports Agata Kulczycka for Polish news outlet Gazeta Wyborcza.

The archaeologists plan to more closely analyze the remains before reburying them at a local parish church, according to Gizmodo. The reburial will strive to preserve the cemetery’s original layout, meaning that the four children interred side by side will once again be laid to rest together.

For the full story by Theresa Machemer, click here.