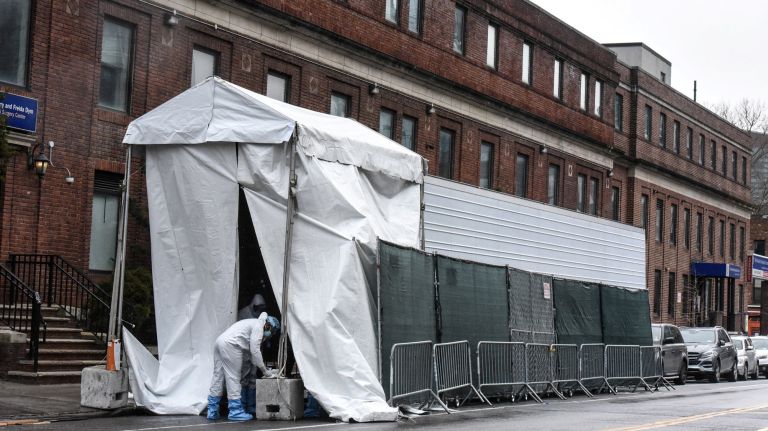 So many people are dying from coronavirus in the metropolitan area that each link in the mortuary system is overwhelmed: morgues, hospitals, funeral homes, cemeteries, crematoria, even transportation between these places.

An average of 61 Long Islanders died every day from 1998 to 2017, according to an analysis of the most recent vital statistics available from the state Health Department. On Friday, according to Nassau and Suffolk counties, there were alone 52 deaths related to coronavirus.

The Moloney business had an approximately ninefold increase on Friday in cremation requests, according to Dan Moloney.

Workers are wearing extra protective gear like N95 masks and are draping extra coverings on the body when handling the remains of someone who died of the virus, and the precautions begin when the remains are picked up, said Mike Lanotte, executive director of the New York State Funeral Directors Association.

But, as in medical settings, there’s a shortage of protective gear among mortuary workers. Lanotte said he’s asked the governor’s office for help acquiring between 20,000 and 25,000 masks to get through the month.

“That’s assuming we don’t see a surge in deaths in other parts of the state,” Lanotte said. He added: “We have funeral directors who have contracted the virus and are symptomatic and not able to work right now. Whether they got it from a decedent, being in the hospital picking up a decedent, we don’t know the specifics, how it was transmitted.”

David Fleming, former executive director of the New York State Association of Cemeteries and now its chief lobbyist, said the pace of graveside services has been slowed by the increased number of deaths and the need to allow fewer people on the grounds at a time for social distancing.

He also said there have been delays at some religious cemeteries “due to staggered staffing to protect workers,” but cemeteries are considering ways to address this issue, such as increasing hours of operation.

Long Island and Calverton national cemeteries — which like all 142 cemeteries operated by the federal Department of Veterans Affairs last month indefinitely suspended services and military honors — have had 40 cancellations since mid-March, according to Les’ A. Melnyk, a spokesman for the National Cemetery Administration. Nationwide, he said, there were about 2,000 cancellations; families want to postpone until after the crisis.

Municipal regulations have been loosened to allow crematoria in New York City to operate 24 hours a day, seven days a week, through June 30, according to a city memo dated April 1.

Until the extended hours, local crematoria were already running at their maximum permitted capacity — typically normal business hours, according to Fleming.

There are four crematoria on Long Island, all in Suffolk, and four in New York City.

State and local plans have been updated in the past several weeks for dealing with mass casualties and pandemics, Fleming said.

Funeral homes are doing their best to adhere to the Jewish law mandating that burial occur within 24 hours, said Rabbi Anchelle Perl of the Mineola Chabad, a Hasidic Jewish outreach group. He said there is a shortage of hearses. In the last week, he said, he got a mass plea over WhatsApp asking who might be willing to drive coffins in their minivans for pay.

The Jewish burial system is stressed, including the rites of washing, purification and shrouding known as Taharah. The millennia-old practice derives from the biblical narrative of Abraham burying his wife, Sarah. Those performing the ritual are now wearing hazmat suits and taking other precautions, Perl said.

Islamic International Funeral Services, which in based in Sunset Park, Brooklyn, and services the metro area and beyond, is not performing Islam’s ritual washing and shrouding per religious law. That’s because of fears of virus transmission and due to the fact there is no space, according to co-owner Kareem Elmatbagi. He said the funeral home’s intake has doubled to about 400 over the last few weeks.

Islamic law mandates burial within 24 hours, but that rule is being waived because of the overwhelming number of cases, he said.

Across the region, the average wait time for a funeral home to pick up a body is far longer, according to officials and funeral workers.

The city’s normal storage capacity of 800 to 900 bodies in the borough morgues has been expanded to about 3,500 with tents, according to city medical examiner spokeswoman Aja Worthy-Davis, who said the office has purchased 45 refrigerated trucks.

Suffolk Medical Examiner Dr. Michael Caplan said in a statement there are fewer cemetery burials because of fewer workers there to perform the work.

When his investigators and drivers go on a coronavirus call, he said, they place a face mask over the deceased and wrap the face in absorbent material because “secretions that may collect … are still capable of being spread when the body is being moved.”

Dr. Mitchell Katz, head of city public hospitals, said: “Everything in our current world is abnormal. Under normal circumstances, people who die are people who were in the hospital for long periods of time — they had cancer. The families prepared. They knew what funeral home they would use. They made arrangements.”

Now, he said, people are dying of coronavirus, often within days of hospital arrival and without their families.

“This is not standard life,” he said.

For the full story by Mathew Chayes, click here.