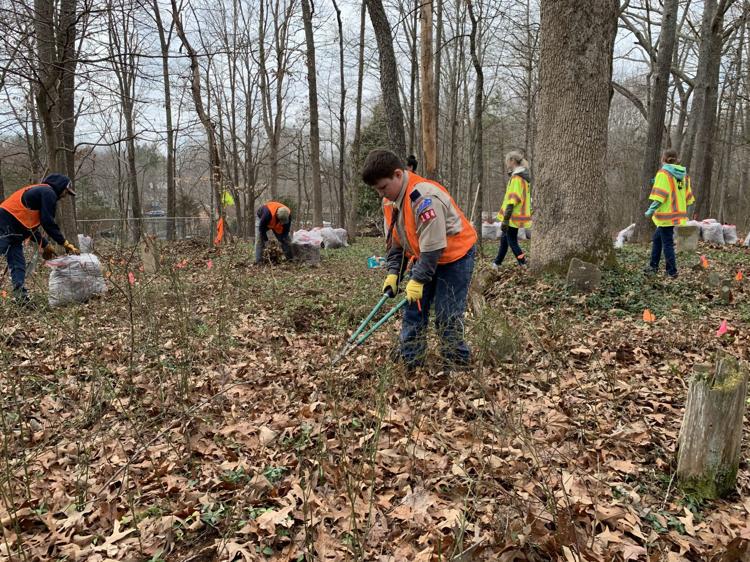 NEW LONDON — For the past several years, Delores Nash Hicks has been lovingly maintaining a now-inactive cemetery in New London where her father and his family were buried.

The work had been a solo mission until Saturday, when she had a little help from her friends.

For the first time, members of the Friends of New London organization, community members and a few Liberty University students came to the cemetery, located off Fowler Street near the historic New London area, in Campbell County off U.S. 460. They were armed with trash bags, chainsaws, rakes and hedge shears.

Around 20 of them worked from 10 a.m. to 3 p.m. at the cemetery for the New London African American Methodist Church, but according to the chairman of the organization, Randy Litchenberger, the cemetery still is so grown over, more work will have to be done to continue maintaining it.

Hicks, 75, said she felt honored to have her friends come help her with the restoration of the landscaping of the cemetery, which means so much to her.

“I’m grateful the community has come together to landscape it once again,” she said. “As a child, I used to walk in the cemetery and I tell people it was so pretty in the fall because all of the trees hadn’t grown up, and with the sun on the leaves, it was so pretty.”

She said having people come together to share her passion for preserving the area’s history and keeping the property maintained where her loved ones are buried is a dream come true.

She said no one has been buried in the cemetery since 1968 when her father was buried.

The one-acre cemetery is a little more than 1,000 feet down the road from the church on Alum Springs Road, but Hicks said this was normal during the 1850s because the cemetery is near where the African American community lived.

“This is all a part of our mission to preserve and interpret the history of New London,” he said. “We consider it all-important. It’s all a part of a story.”

In 1852, Andrew Holt dedicated property on Alum Springs Road in New London to both free and enslaved blacks where he envisioned a church would stand for African Americans. Holt was a free man of color and a baker who lived in the New London community.

In 1930, 70 years after Holt died, an African American church, New London United Methodist, was built on the land.

Litchenberger said the date of the earliest grave in the cemetery is unknown, but it probably started out as a family cemetery that expanded to hold church members after land for the church was donated in 1852.

He believes the cemetery might hold around 100 graves, many of which are unmarked.

There are a few dozen headstones with engravings, but many graves have unmarked stones.

For the full story by Rachael Smith, click here.