Paying some respects at forgotten cemetery 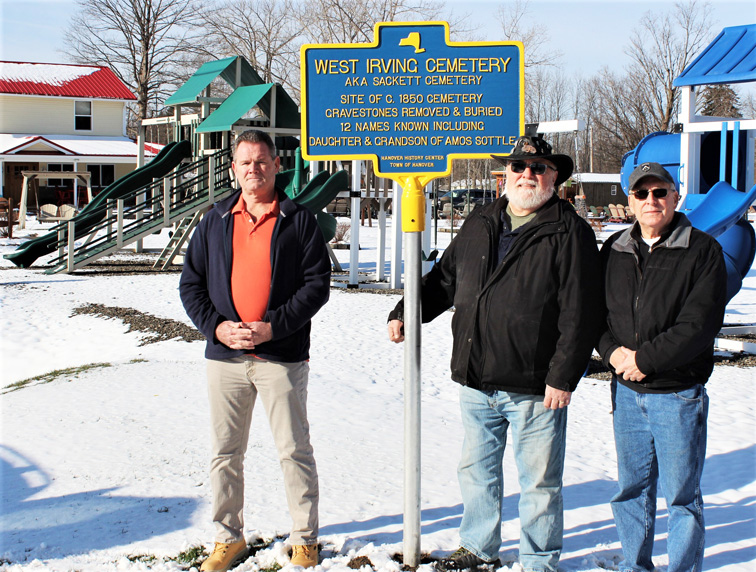 HANOVER – Citizens everywhere should adhere to and be guided by this very simple but important principle — all cemeteries should be respected and protected.

Sometimes this principle is ignored.

Such was the case with the West Irving Cemetery, located on Routes 5 and 20 in the Sunset Bay area of Hanover, directly across from Lake Shore Hospital.

Also known as the Sackett Family Cemetery or Irving Rural Cemetery, it appears on maps from 1854, 1867, and 1881, though it was established as early as the 1830s. Because it is located on private land, it did not have the protection that public cemeteries usually have.

With cemeteries located on private properties, the public must very much rely on the ethical behavior of the owners, hoping that they will act as proper caretakers of such sacred areas.

Sometimes we forget that the gravestones themselves are owned by the person or people who purchased the stone and later by any legally appropriate descendants. Private property or not, gravestone ownership continues.

Sadly, as early as the 1920s the West Irving Cemetery was already in a state of neglect, with fallen stones and high weeds.

This was documented by E. May Christy, a Hanover resident who in the mid-1920s recorded the names and dates of people buried in many area cemeteries. She was able to record 11 names and wrote this: “Only a few stones remaining. Overgrown. A great many must have been removed. Not cared for.”

The cemetery most likely remained in this state until one owner decided to remove the remaining gravestones, push them over the bank out back, and bury them.

In 1989, I visited the area with my son Steve, and we found pieces of broken gravestones down the bank.

My son found one partial stone with the name “Loba” on it, and I took what photos I could.

These pieces also ended up buried.

I informed the owner at that time that, private property or not, New York State cemetery laws and public health laws would be violated if anyone were to dig into the graves themselves.

If that were to happen, I would have no choice but to act to protect the burials.

Then in 1997, I found a map of the cemetery in an old trunk that Norm Sackett donated to the Hanover History Center collection.

His Sackett ancestors were quite involved with early 1800s Hanover property, business, and agriculture. Marcus Sackett was a Hanover Justice of the Peace.

Sacketts owned stores and a grist mill. Unfortunately, the map was only a plot map showing cemetery dimensions, lacking names of plot owners.

The Sacketts owned the land at one time where the cemetery is located. Of the 12 names recorded of people buried there, two are of special note.

Thurza Stiles was the daughter of Amos Sottle, the first settler of Hanover and Chautauqua County in 1796.

She married Nathan Stiles and died in 1836 in her early 20s.

Their son, Amos Nathan Stiles, the grandson of Amos Sottle, died at age 18 in 1852 and is also buried there.

In all probability, Amos and his wife Chloe stood at their daughter’s grave and shed tears there. Many others no doubt hallowed that burial ground with their grief and tears and repeated visits.

Jim Greene thinks that there is a high probability that Adam Hess is buried there.

Hess married into the Gustavus Tracy family who owned the property in the later 1800s.

Tracy built the remodeled house that stands there today.

Hess lived across the street from them up on the hill.

Greene, a descendant of the Tracy and Hess families, has searched for Hess’s burial site to no avail. He believes that Hess is in the West Irving Cemetery.

Besides Mr. Greene, I was able to find one other person who definitely has relatives buried there. Both Mr. Greene and that other person wrote letters of support of my work with the cemetery, and the letters are on file at the Hanover History Center.

To locate as precisely as possible where the cemetery was, I interviewed two residents who lived near the cemetery and remembered seeing the gravestones there before they were desecrated by removal. I also used maps, documents, and an old aerial photo.

Another photograph I located showed small buildings on the land nearest the highway, indicating that the cemetery was set on land toward the back of the lot.

This was verified in the interviews.

Also, grading toward the front of the property showed no signs of burial outlines.

So the front line of the cemetery parallels the highway and begins about 80 feet behind the historical marker.

Finally, with the marker placed in December 2019, that cemetery has a measure of protection.

For the full story by Vince Martonis, click here.