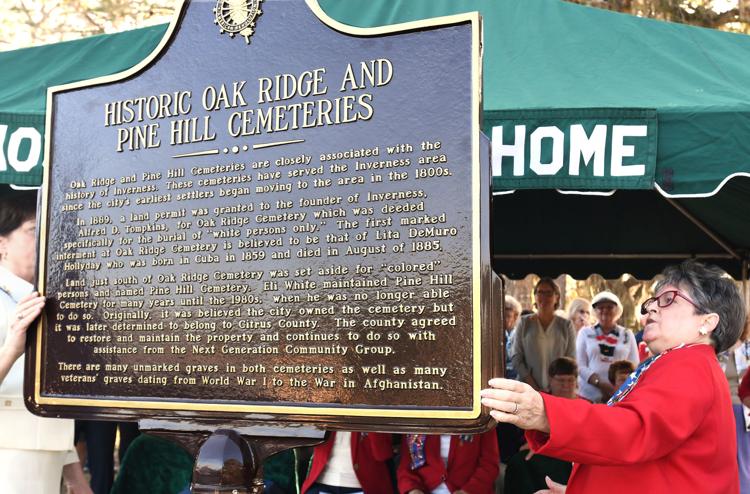 It was a solemn, yet joyous day as Inverness leaders and residents met with members of the National Society of the Daughters of the American Revolution as the local Fort Cooper Chapter unveiled a historic marker at the Oak Ridge and Pine Hill cemeteries Monday in Inverness.

“When I first joined the DAR, our chapter was coming out to the cemetery to do some clean-ups … and I wasn’t sure where the cemetery was,” said Kim Bennett, regent of the Fort Cooper DAR chapter.

“My directions were: ‘Turn right on the street between Citrus High School and Citrus Memorial Hospital (Line Street) — keep going and you will run into the cemetery.’ It bothered me that there wasn’t a sign anywhere that gave the name of the cemetery, let alone the history behind the two cemeteries,” she said.

It bothered her that the cemeteries were originally divided by race: Oak Ridge was “whites only” and Pine Hill was “for colored persons.”

“When I became Regent of the Fort Cooper Chapter DAR, I chose this as my historical preservation project,” she said, adding that it’s her prayer that somehow the one historic maker will unite the two cemeteries, at least in spirit.

Kathy Turner Thompson, Citrus County historical resource manager and treasurer of Fort Cooper Chapter DAR, gave a brief history of the cemeteries, taken from the words on the marker itself.

In 1889, a land permit was granted to Alfred Tompkins, the founder of Inverness, for Oak Ridge Cemetery, deeded specifically for the burial of “white persons only.”

The first marked burial is believed to be that of Lita DeMuro Hollyday, the daughter of Judge DeMuro, who was born in Cuba in 1859 and died in August 1885.

There are about 262 known graves, many of those are either unmarked or the years have weathered away the names and dates on the limestone markers.

The oldest known grave with a hand-graven marker belongs to F.R. Kiye, who died April 1919.

Eli White maintained Pine Hill Cemetery for many years, until the 1980s.

“Originally, it was believed the city owned the cemetery, but it was later determined to belong to Citrus County,” Turner-Thompson said. “The county agreed to restore and maintain the property and continues to do so with assistance from the Next Generation Community Group.”

The city of Inverness has owned Oak Ridge Cemetery since 1981.

The historic marker ends with the words: “There are many unmarked graves in both cemeteries as well as many veterans’ graves dating from World War I to the War in Afghanistan.”

Kay Yarbrough, the DAR state regent, challenged the Inverness City Council and mayor to create a day of service, urging residents to clean up the cemeteries.

“Because they’re so worth saving,” she said. “It’s important that we preserve them, not just for those (deceased) that we honor, but for future generations.”

“It’s also a chance for the community to see the important legacy that this cemetery represents,” she said. “With this DAR marker, it shows the significance of the two parts of the cemetery being brought together.”

For the full story by Nancy Kennedy, click here.