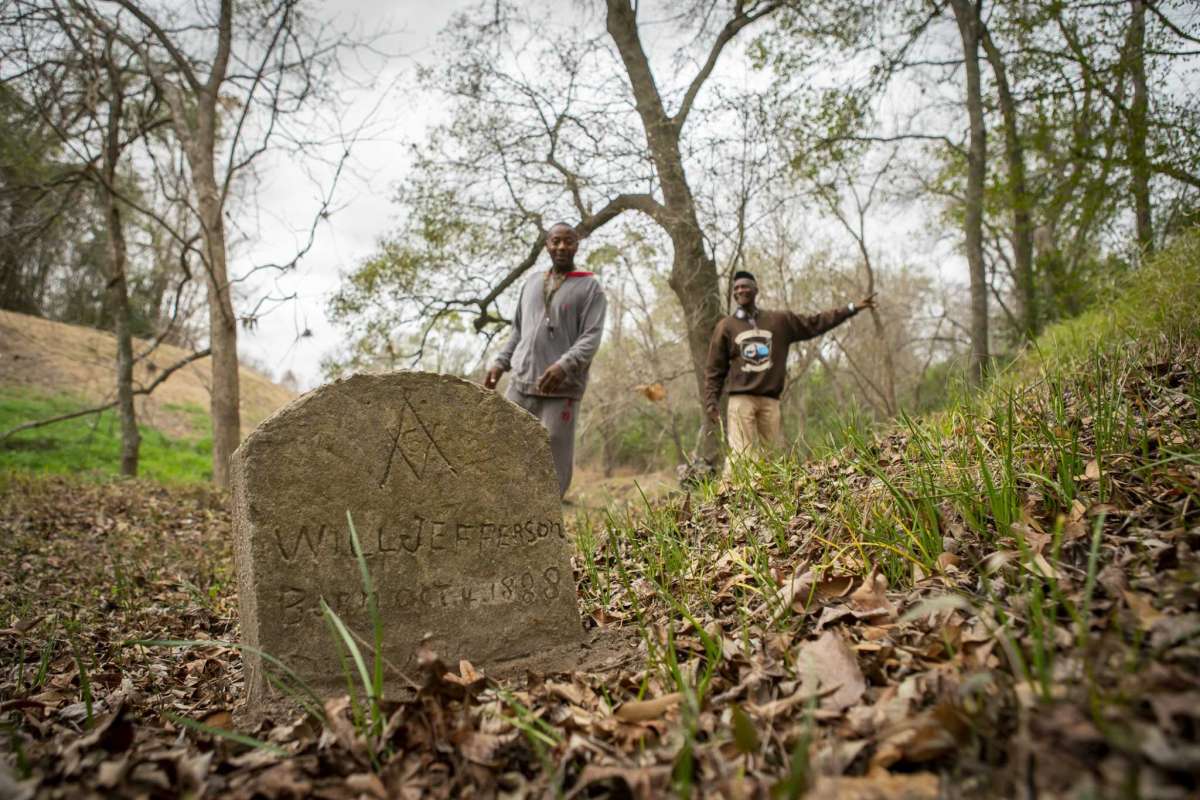 HOUSTON -Patrick Young waited in the woods to see who had put up a padlocked gate across the entrance to a cemetery where his family has been buried since the time they were enslaved.

He had driven up to tend to the graves as he always did when he saw the gate. At first, he figured the people who put up the gate just hadn’t known it was a cemetery. But when he told the next person who came to the gate — who, he said, worked for one of the many companies that have moved in over the last few decades — nothing changed.

“I was just thinking, what was wrong with these folks?” said Young, 50, of the incident around six years ago. “If something happened to me, I don’t want to be forgotten like that.”

The Pleasant Green-Culbertson cemetery, which sits in northeast Houston behind roads peppered with concrete plants and trucking depots, is just one of thousands of eroding African-American cemeteries across the state, in danger of being erased as descendants of those buried have died out, moved out or been pushed out. Many of the cemeteries are long gone. For years, mainstream historians didn’t pay attention to them; now genealogists, historians and families are rushing to save them.

None of the companies in the area around the cemetery have returned requests for comment. The cemetery area is surrounded by more than a dozen plants and industrial areas: concrete, trucking, oil, cranes, welding, suspension repairs and freight cars. Texas law requires owners of land around cemeteries to designate “reasonable” entry and exit routes, and it’s illegal to tamper with a grave.

Young isn’t sure if pushing his way through the woods around the graves when he used to drive right up is “reasonable.” There’s no set way in: He found the way there in 10 minutes on a recent day, but spent 30 minutes getting lost on the way back .

“This ain’t right,” he muttered, pushing tree branches and thorns away as he walked toward the graves. “It ain’t right.”

The tract of land where the cemetery sits was once part of a plantation, bought by Young’s great-great-grandfather, who was born a slave. He saved enough when he was freed to buy 12 acres for his 12 children.

“All those people buried back there — they’re all my relatives,” said 70-year-old Patricia Angel, Young’s mother. “The reason I really stayed here is because I’ve always been concerned about the cemetery.”

Angel grew up tending the cemetery with her mother. Whenever there was a funeral, her grandfather and his brothers dug the grave and uncles, aunts and cousins followed behind the horse-drawn hearse. After the burial, Angel and her cousins checked every so often to see how long it took the dirt to settle. The cemetery today has a few dozen headstones poking out of overgrown trees, partially covered by fall leaves, kept up only by Angel and then, when she couldn’t, by Young. A small stone marks a baby’s grave. One headstone on the banks of the bayou has a Mason’s mark.

Even when Angel was growing up, the cemetery was overgrown.

“I used to ask my mother, ‘Why didn’t we have somebody clean the grave?’” she said. “‘Who’s supposed to do that?’” Angel’s mother didn’t have an answer.

Harris County Commissioners Court on Dec. 7 approved creation of an advisory board on preserving African-American heritage and culture that could help guide the county as these issues come up. Harris County has jurisdiction over the cemetery itself. But Houston and Harris County officials differed as to who had jurisdiction over the roads. Frida Villabolos, communications director for Harris County Precinct 2 Commissioner Adrian Garcia, said the roads were the city of Houston’s responsibility; Erin Jones in the Houston Public Works Department said the roads were part of something called an “unrestricted subdivision” and not in the city’s purview.

The Texas Historical Commission estimates that there are 50,000 cemeteries in Texas, from unmarked graves to rows of matching headstones behind a church. It’s not clear how many are African American. Efforts like the Texas Freedom Colonies Project are trying to track African American settlements and cemeteries with an eye toward preservation (Texas Freedom Colonies has so far found 500 settlements established by freed slaves).

For the full story by Sarah Smith, click here.