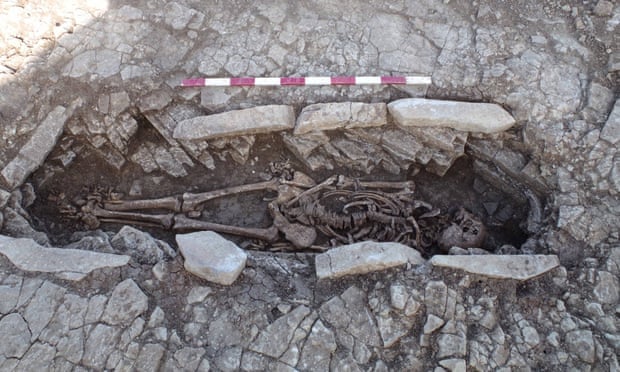 The resting places of more than 50 adults and children have been found in an unusual Roman cemetery unearthed during building work for a new school in Somerset.

Archaeologists say the discovery at Somerton, near Glastonbury, sheds significant light on life and death in the southwest of Britain after the Roman invasion.

Some of the people buried in the Romano-British cemetery were clearly of high status, with the position of one woman’s skull indicating her head was initially resting on a pillow.

Tiny nails were also found at the foot of the graves, suggesting most of the people were buried wearing hobnail boots.

But it is the structure of the graves that is fascinating. The majority were lined with local stone and capped and sealed with the same sort of slabs used to create roofs in the area 2,000 years ago.

In one particularly unusual grave, slabs were used to create a tent-like structure above the person who was buried.

A similar setup was recently discovered at the Hinkley Point C nuclear power station construction site on the Somerset coast – 25 miles (40km) north-west of Somerton – and it has echoes of grave profiles in Spain and Italy.

Other finds include “grave goods” such as pottery and jewelry, while one pot that was dug up contained a chicken wing. A coin from the time of Emperor Vespasian, who ruled from AD69 to AD79, and a piece of carved bone, most likely from a knife handle, were also uncovered.

Steve Membery, an archaeologist and member of the South West Heritage Trust, which has overseen the excavations, said: “This site is a significant discovery. The individuals were evidently of some status. Most graves in Roman Britain are pretty much a rectangular cut with someone laid on their back. They’ve actually built these graves. There’s been a lot more care taken over these.”

Membery believes the people who have been found would have lived and worked in a nearby Roman villa. The villa has yet to be discovered but what is believed to be an outhouse and a barn associated with it have been found.

Evidence has also been uncovered of an iron-age settlement predating the Roman cemetery. Membery said one of the most interesting elements of the cemetery was that it showed how local people adopted Roman burial customs. Bodies were squashed into the oldest graves but laid flat, in the Roman style, in the later ones, and grave goods were placed close to the head.

DNA analysis will be carried out to try to learn more about the people who were buried at Somerton. It is thought likely they were British people who had adopted Roman customs after the invasion.

But analysis of remains found at Hinkley Point found evidence people buried there had origins in east Asia. “They probably made their way to the eastern Roman empire and then their descendants came to Britain,” Membery said. The find means archaeologists in Somerset are hesitant to make assumptions about the possible origins of people whose remains are unearthed.

The Somerton cemetery was found on land owned by Somerset county council during building work for a new junior and infant school. Work had to be halted but will restart later this month.

Cllr Faye Purbrick, the cabinet member for education, said: “The findings are both exciting and extraordinary, providing us with valuable insight into Somerset’s early history. We will be able to understand so much more about the lives of Roman people in Somerton thanks to these discoveries.”

The site’s archaeology has been gathered for further scientific analysis. A full report of the findings will be published in due course.

For the full story by Steven Morris, click here.