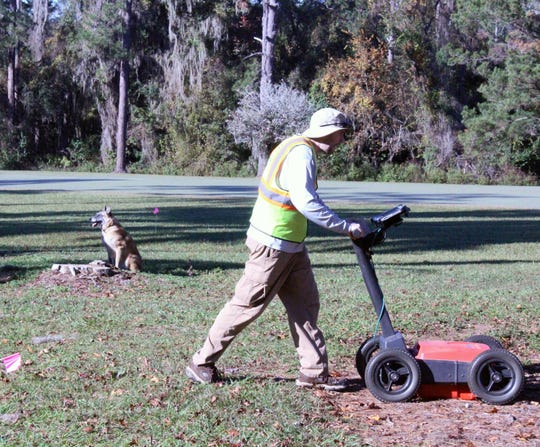 Tests indicate the existence of graves on the grounds of the Capital City Country Club, archaeologist Jeffrey Shanks said Thursday.

The National Park Service began testing near the 7th hole of the golf course in mid-November and finished Monday, in coordination with the club’s staff and the city.

“The preliminary results of this testing appear to confirm the presence of a cemetery at the site,” Shanks said in a release.

Historic records suggest the cemetery is associated with a former plantation once owned by the Houstoun family.

“The cemetery likely includes burials of enslaved persons who worked on the plantation,” said Jonathan Lammers, a historian consultant who has done extensive research on the once sprawling plantation site.

“It may also include burials dating to the post-Civil War period when formerly enslaved persons living nearby continued to use the site,” he added.

“Preliminary results from the GPR data revealed the presence of approximately 40 subsurface anomalies near Hole 7 on the golf course that can be identified as graves with a high level of confidence,” Shanks said.

The results were confirmed by numerous positive alerts from the trained dogs.

In fact, Shanks said his team discovered what appear to be “two or three rows” of graves — but there could be more.

“GPR, in cases like this, will not pick up all of the graves,” he said. “It is safe to assume there are more graves present than what the (radar) is showing.”

A ‘cemetery is present’

The decision by the city and Capital City Country Club to seek assistance from the National Park Service was sparked in February by Delaitre Hollinger, executive director of The National Association for the Preservation of African-American History & Culture, Inc. and immediate past president of the Tallahassee branch of the NAACP.

Hollinger appealed to city commissioners to conduct a study of the golf course to determine whether a burial ground was there.

If graves were discovered, he asked that the country club and city come up with a recognition in the form of a marker.

Once all testing and analysis have been completed, a report on the findings will be issued to both the City of Tallahassee and the country club, the news release said.

“When I initially presented the news articles to the city commission in February, we were searching for answers,” Hollinger said. “I am pleased that the preliminary results indeed do confirm that the cemetery is present.

“This has been a lengthy process, but I am pleased that (our) working group can now move forward in discussing how best to appropriately memorialize these formerly enslaved persons who occupy space on the golf course,” he added.

“As I lover of local and golf history, this process has been absolutely fascinating to be involved with,” Revell said. “It has been a pleasure to work with like-minded history buffs, technical experts, and other interested parties to confirm the cemetery site at Capital City Country Club. I believe our broader community and perhaps even many people with a general interest in history will find this story quite interesting and informative.

I’m looking forward to working with all stakeholders and our club members to devise a proper way to memorialize the site on the golf course and tell a fuller story of the history that has unfolded there.”

Land was once plantation

The land that now comprises the Capital City Country Club golf course was once part of the Edward Houstoun Plantation, which operated from the 1830s through the Civil War, the release said.

At its height, the plantation encompassed nearly seven square miles of land and was worked by a labor force of approximately 80 slaves.

After the Civil War, it is believed that formerly enslaved persons from the Houstoun plantation likely continued working on the land as agricultural laborers. They also likely contributed to the formation of the African American enclave in the area later known as Smokey Hollow.

During this period, the plantation was inherited by Patrick Houstoun, who managed it as a stock farm and dairy. Patrick was active in state politics and was serving as the Adjutant General of Florida when he died in 1901.

A known gravesite is currently maintained by the country club and exists in an area that is not commonly disturbed by golfers.

“As far as the next steps, that will be up to the appropriate stakeholders,” said Shanks, who was presenting the findings Thursday night to the Tallahassee Historical Society.

“I would not, however, recommend any excavation or ground-disturbing activities. These burials are not under threat of development or other disturbance and, in my opinion, should be left in place if possible.

“Personally, I would like to see them memorialized in some way, so they are not forgotten to history.”

Shanks said it was important to note the cemetery at the golf course “is not an outlier —there are many hundreds of these abandoned and unmarked historic cemeteries across the state, many of them African American … It is a major statewide issue that needs to be addressed.”

In September, archaeologists in Hillsborough County discovered the existence of 120 coffins at the Robles Park Village apartment site in Tampa. The discovery is believed to be the first African-American burial ground in Tampa.

In November, 145 caskets were discovered through another survey in Tampa, this time at King High School. The caskets are reported to be from the Ridgewood Cemetery, a paupers’ burial ground.

Shanks said the Zion Cemetery at the Robles Park Village site has led to efforts to relocate other cemeteries like this across the state. It also has led to three Democratic state senators — Tampa’s Janet Cruz, St. Petersburg’s Darryl Rouson, and Senate Democratic Leader Audrey Gibson of Jacksonville — to file a bill to address the issue.

“The discovery of these graves at the Capital City Country Club will be an important part of the statewide conversation on how to best protect abandoned African American cemeteries,” Shanks said.

For the full story by Byron Dobson, click here.