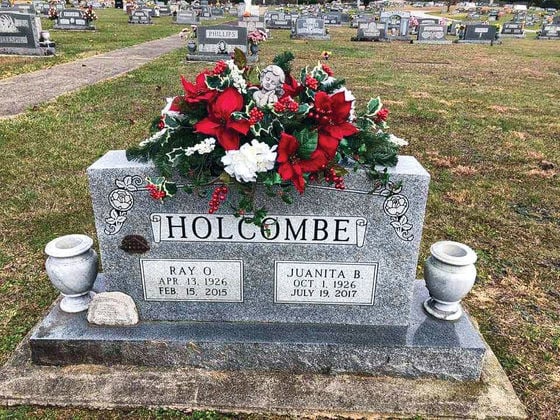 When Linda Petit took her husband, Ray, to see the floral arrangement on her parents’ gravestone on Sunday at the Blue Ridge Gardens of Memory (formerly Pisgah Gardens) off Hendersonville Highway, she found their marker barren.

Linda and Ray’s daughter, Denise Gonsales, who lives outside of Savannah, Ga., brought the ornate, Christmas-themed saddle to decorate her grandparents’ marker before Thanksgiving, but Ray hadn’t had the opportunity to see it, yet.

Thinking it had been misplaced, Linda said she drove around the entire cemetery searching for the flowers before realizing they had been stolen.

When Linda reported the theft to the business office, she said she was told that she was the third person to report missing flowers this week.

“It just makes me sad to think someone would rob from the dead,” she said. “It’s heartbreaking.”

“It would be very easy for someone to ride through, target the flowers they want, and come back later and take them,” she said.

Linda realizes that preventing this type of theft would be difficult.

“I was told that they contacted the sheriff’s department and requested extra patrolling of the area,” she said.

Having put up a new arrangement, she said it “still doesn’t compare to what was taken.”

“I just couldn’t stand for it to be bare,” she said. “My mom (Juanita) was from the old school, and she taught me that flowers are a way to honor people.”

She remembers Juanita taking her to Mars Hill to decorate her own grandparents’ grave when she was a child.

“That’s something she felt was valuable, and it’s a ceremony I’ve tried to keep up,” she said. “I try to keep flowers on their grave all the time and this is the first time something like this has ever happened.”

“If it hadn’t been from my friend, it would have been a lot more expensive,” Gonsales said. “It was a custom piece, with a beautiful angel at its center.”

Gonsales said they keep flowers on her grandparents’ marker year-round.

“The holidays are a special time, and a hard time, so this is a way to do something for my grandparents and my mom,” she said.

Ray and Juanita, she said, were “wonderful, loving people.”

“They lived next door to us in Brevard, so that’s where I went every day when I got off the bus, so I spent a lot of time there, along with my two sisters,” Gonsales said.

She called the theft “grave-robbing” and a “hurtful thing.”

“I can’t imagine what type of life a person leads to where this would be an answer – to steal from someone’s grave,” Gonsales said. “I don’t think you can stoop any lower. It’s heartbreaking, and it hurts my heart, not only for my mom and grandparents, but also for whomever commits this kind of act.”

Heather Barton, the branch office manager at Blue Ridge Gardens of Memory, said, though there are incidents of theft throughout the year, it increases during the holidays, and she said “15 to 16 people have called so far.”

“This cemetery is at 40 acres, so there is not too much we can do, really,” she said. “Every year at this time this starts happening, and if you go to Smiley’s Flea Market on the weekend, I’m pretty sure you can find them being sold there.”

Her theory is that the culprits are scoping the cemetery during the day for the target arrangements, and then coming back at night when the office is closed.

“That’s just what I think is happening,” she said. “Every year, when people start telling me flowers are missing, I report it to the Transylvania County Sheriff’s Office and for the next two or three weeks they send an officer to drive through to hopefully steer off anyone who might be out here doing something bad.”

Barton, whose second job is at Walmart in Pisgah Forest, said she’s familiar with how hard it is to not only catch but also press charges on a shoplifter.

“Even the sheriff’s department tells me, you have to catch them in the act,” she said. “It’s like at Walmart, even with cameras on people and with eyes on the person, I mean I can watch someone put something in their coat, but all I can do is provide excellent customer service and call security because of all the legal issues around apprehending someone.”

Barton said when the calls about stolen flowers begin, she will check on her own family’s plots, after checking the caller’s.

“I’ve got family buried out here too, and I’ve had up to three arrangements stolen from theirs,” she said.

After Christmas, she said, it stops happening.

“It’s not all the time,” she said. “It’s not like we have a vandal problem, and the cemetery is very well kept; it’s just during the holidays.”

One woman, she said, became “so tired” of her arrangements being stolen that she “booby-trapped” one.

She put razor blades in the bottom of the arrangement, Barton said, and the woman came into her office days later “snickering” and reported that she found “blood all over the marker.”

“I’m sorry, but that’s what you get for trying to steal from someone’s grave,” Barton said. “I can’t say I blame her.”

Barton said she tells customers to tie the arrangements down to make it harder.

“Granted, if they still want it, they can cut whatever you use, but it wouldn’t be as easy as pulling it off,” she said. “I wish there were something I could do, but we can’t have someone just stay here constantly. And with so much acreage, we could have someone stay here all night and drive around the cemetery, but the thieves could literally hit a side of the garden while security were on the other side, and by the time he got around they would be gone. There are four different entrances to the cemetery.”

Barton said when she gets off her second job at night she will patrol the cemetery before going home to deter any possible thefts.

“It’s the bad side of humanity,” she said. “This time of year you would hope people would be doing good deeds and paying good deeds forward, but there is always some lowlife that has found a way to cash in on someone’s suffering.

“But as a business, we are doing everything we can possibly do to prevent this from happening.”

For the full story by Matt McGregor, click here.