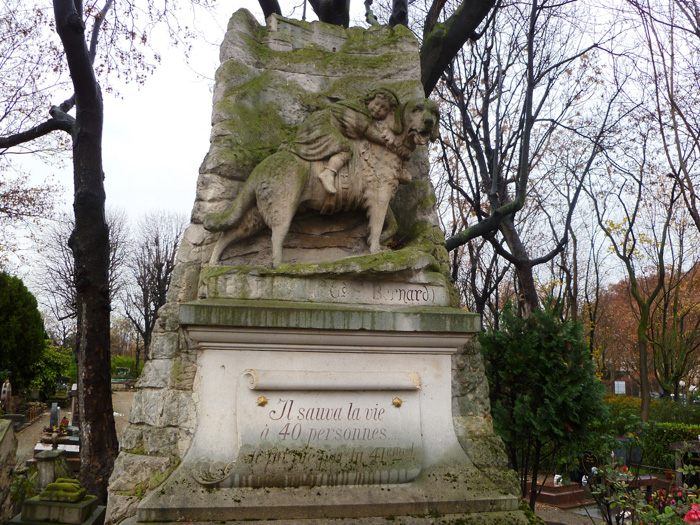 While the cemetery is commonly referred to as simply “Le Cimetière des Chiens,” you’ll see a few places where the longer name of “Le Cimetière des Chiens et Autres Animaux Domestiques” (the cemetery of dogs and other pets) is given, including an inscription in stone on a monument near the entrance. So the cemetery has welcomed non-canine animals as well for a long time, perhaps since the place first opened in 1899. There are tons of cat graves, as well as some horses, at least one monkey, a sheep, a hen, etc.

This monument, right inside the front entrance of the cemetery, is a statue of Barry, a World War I trench dog. The inscription is pretty crazy: “He saved the lives of 40 people. He was killed by the 41st.” Whoa! My friend and I asked the guy who was working at the little front office about Barry, and he explained that the kid on Barry’s back in the statue is the 41st. Barry had dragged 40 wounded people away from a battlefield somewhere, and as soon as he got this kid to safety, he died of exhaustion. Whew! Okay then. So “killed BY the 41st” is a little misleading, I guess, but I’m glad to have found out it wasn’t on purpose.