Dargavs Village: City of the Dead 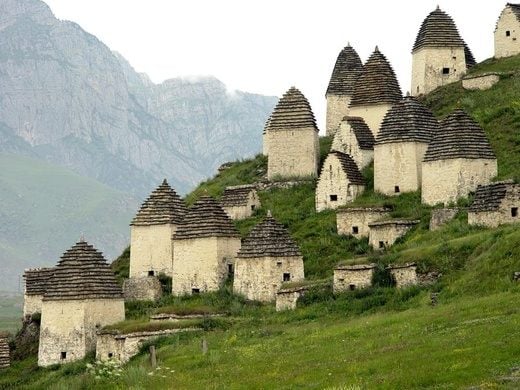 This ancient village and its adjoining cemetery have a beautiful history of death and remembrance.
The village of Dargavs, or the City of the Dead, has an ancient cemetery where people that lived in the valley buried their loved ones along with their clothes and belongings. The valley stretches for 17 kilometers, and the cemetery contains almost 100 ancient stone crypts.

Ossetians say that the cemetery helps them understand how people lived 400 years ago. Archeologists, also, are very interested in exploring the site more completely, as there have been interesting items found that have attracted some scientific attention.

It is a very mysterious place with a lot of myths and legends. It was once believed that if anyone tried to get to the city they would never emerge alive.

Local legends have it that in the 18th century a plague swept through Ossetia. The clans built quarantine houses for sick family members, who were provided with food but not the freedom to move about until death claimed their lives. People who did not have any remaining family members to bury them would just wait in the massive cemetery until their death. It was a very slow and painful way to go, and in the City of Death they stay.

It attracts tourists from nearby as well as all over the world, although due to the difficulty in finding or traveling to the location there are not a lot of tourists at any given time. The local superstitions probably have little to do with the lack of popularity, although they do still linger.

For the full story by Atlas Obscura, click here.