Père-Lachaise Cemetery Hailed the Most Visited Cemetery in the World 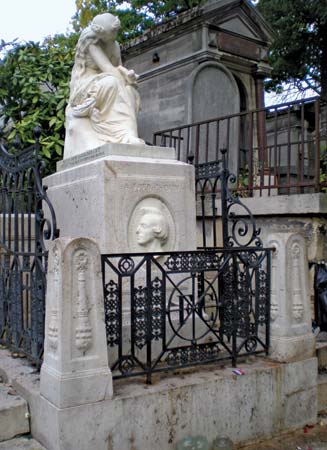 Père-Lachaise Cemetery, formal name Cimetiere de l’Est (“Cemetery of the East”), cemetery and park located on the northeast side of Paris, France. Situated on some 110 acres (44.5 hectares), amid more than 5,000 trees, it is both the largest park and the largest cemetery in Paris. Estimates concerning the number of people buried there vary widely, from some 300,000 to about 1,000,000. Père-Lachaise is a major tourist attraction, renowned for its tombs of notable figures, and it is often hailed as the most-visited cemetery in the world. It has always been nondenominational. Among the famous people buried there are Peter Abelard and Héloïse, Molière, Eugène Delacroix, Jacques-Louis David, Georges Bizet, Frédéric Chopin, Honoré de Balzac, Marcel Proust, Georges Seurat, Oscar Wilde, Sarah Bernhardt, Isadora Duncan, Gertrude Stein, Colette, Edith Piaf, Marcel Marceau, Richard Wright, Yves Montand, and Jim Morrison. The remains of Abelard and Héloïse (who died in 1142 and 1164, respectively) are reportedly the oldest identifiable bones in the cemetery.

The cemetery grounds are located on a hillside once known as Champ Evêque, where an affluent merchant lived in the 15th century. Jesuits took possession of his house in the 17th century and converted it into a Jesuit retreat. King Louis XIV’s confessor, Father François de la Chaise d’Aix (commonly called le Père la Chaise), resided there, and the cemetery’s name derives from him. The Jesuits renamed the hill Mont-Louis in honour of the king, who reportedly visited the area during times of unrest, as during the Fronde. The king’s bodyguard also had a residence there, and the area became noted for its lavish parties, attended by those anxious to curry favour with both the king and his confessor. After Père La Chaise died in 1709, the estate was greatly expanded. The Jesuits were evicted from the property in the mid-1760s during the general expulsion of the order from France.

By the end of the 18th century, burial space in Paris was at a premium, and city officials became concerned about the possibility of disease spreading from the overcrowded cemeteries. As a result, the area was established as a municipal cemetery in 1804. The site was designed by architect Alexandre-Théodore Brogniart and further developed by urban planner Nicolas Frochot. Initially, because of its location on the outskirts of the city (it was incorporated into the Ville de Paris in 1860), Père-Lachaise was used for reburials from older cemeteries. In order to advertise the cemetery and to encourage its use, Frochot and city officials, with much fanfare, relocated the remains of famous people from other cemeteries to Père-Lachaise. Balzac’s references to the cemetery in some of his fictional works also helped to popularize the new facility. Before long, burial in Père-Lachaise had become a matter of status, as the number of ostentatious tombs gives evidence. In the late 19th century a crematorium was added.

For the full story by Kimberly Daul of Encyclopaedia Britannica, click here.