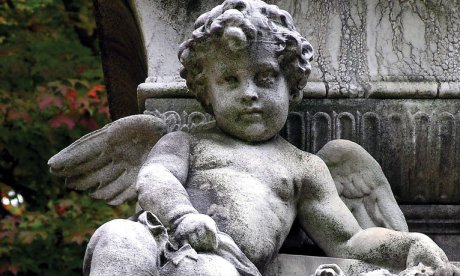 Not far from the Harvard University campus, in Cambridge, Massachusetts, Mt. Auburn Street is busy and clogged with traffic during the morning rush hour as commuters and their cars creep across the urban landscape of auto shops, supermarkets, and liquor stores. But as I turn into the Egyptian Revival gateway of Mount Auburn Cemetery, a completely different world comes into view. The 175 acres of America’s first “garden cemetery” roll gently away from the traffic and noise, dotted with the gravestones and monuments of more than 97,000 departed souls—luminaries and ordinary Bostonians alike. In death, they share the peaceful wooded lanes and groves that made Mount Auburn, founded in 1831, unlike any American burial ground that came before it.

This final resting place is still active. A nondenominational cemetery, eleven hundred cremations and five hundred interments take place there each year. It is also an outdoor museum of art and architecture and, lastly, a monument to the seismic shift in American attitudes toward death during the early nineteenth century.

One thing I’ve always loved about wandering in cemeteries is the way that gravestones hint at the lives of the people buried within. A name, a beautiful carving, a date, an unusual epitaph can conjure the person and sometimes the society in which he or she lived. If a cemetery like Mount Auburn is a place of contemplation, it’s also one of imagination.

Before 1831, dead Bostonians were laid to rest in crowded, city graveyards, their graves marked by dark slates carved with symbols calling to mind the horrors of death preached by Calvinist ministers: skulls and crossbones, hourglasses denoting the passage of time, the skeletal figure of Death holding a scythe. The stones “emphasize the message of memento mori, the reminder that each individual must die, the grim lesson of Calvinistic predestination,” writes Blanche Linden-Ward, a Mount Auburn scholar and author of Silent City on a Hill: Picturesque Landscapes of Memory and Boston’s Mount Auburn Cemetery.

By the early 1800s, the graveyards of the fast-growing city had become public-health hazards. City officials worried about gases, from the overcrowded, decaying bodies, rising from the graves, the spread of disease, and the leaching of human remains into the city’s water supply.

In 1825, Harvard professor and physician Jacob Bigelow called a meeting of city leaders to discuss the idea of a rural cemetery for the Boston area. A piece of land on the Cambridge-Watertown border graced with woodlands, ponds, natural hills, and stunning views of the city was chosen. The acreage—which Harvard students had long referred to as “Sweet Auburn” after a poem by Oliver Goldsmith—was purchased, the design process begun, and, in 1831, the cemetery was founded by the newly formed Massachusetts Horticultural Society. Designed by Bigelow, Henry Alexander Scammell Dearborn, and Alexander Wadsworth, it was inspired by Père Lachaise Cemetery, the huge Parisian burial park containing the remains of many of France’s best-known thinkers, leaders, and artists. Among American cemeteries, Mount Auburn was the first to embrace a natural, pastoral setting for burial.

At the beginning of the nineteenth century, the salty Boston air was alive with new ideas about death and what happened to the soul afterward. Even the use of the word “cemetery” was revolutionary. Derived from the Greek for “sleeping place,” it reflected the evolving sense that death was not necessarily the end of life.

On Greenbrier Path, in one of the oldest parts of Mount Auburn Cemetery, lies a white marble monument that marks the grave of William Ellery Channing. Channing, a Boston theologian, was a leading figure of American liberal theology in the early 1800s. His rejection of Calvinism and his ideas about a more personal, gentler relationship with God helped inform the design of Mount Auburn, which was open to the public, not just to those who had family buried within its walls. Rather than confining worship to a church, Channing and other reformers encouraged reflection everywhere. He “declared his ‘love to be touched, moved, but not depressed’” during a visit to a cemetery, writes Linden-Ward.

European Romanticism played its part in the new fashion for rural cemeteries, as did trends in English garden design, which emphasized naturalistic landscapes over formal ones and encouraged the installation of objects worthy of melancholy contemplation. Many gardens at large English estates contained memorial obelisks or other structures that commemorated departed family members, and the landscape designs themselves, with areas of dark and light, reflecting pools and ponds, and contrasting areas of hill and valley, were intended to spark thoughts about mortality. The emphasis on feeling was a reflection of the changing times, says Linden-Ward. “As Puritanism declined,” she writes, “melancholy gradually became the ideal emotional response recommended by ministers to their congregations and readers, replacing Calvinistic fears of man’s postmortem fate.”

This heady stew of ideas combined to create Mount Auburn, which, in turn, inspired many other garden cemeteries—Green-Wood in Brooklyn, Laurel Hill Cemetery in Philadelphia, Bellefontaine Cemetery in St. Louis, among them—as well as Frederick Law Olmsted’s Central Park.

From its founding, Mount Auburn was recognized for its integration of natural beauty and man-made art. At the consecration of the cemetery on September 24, 1831, U.S. Supreme Court Justice, Harvard professor, and the first president of Mount Auburn, Joseph Story, said, “A rural cemetery seems to combine in itself all the advantages, which can be proposed to gratify human feelings, or tranquilize human fears.”

Almost immediately, the cemetery became a destination for tourists and for Bostonians looking for a pleasant day out. Rather than the dread of death provoked by a visit to an old-style churchyard, a stroll through Mount Auburn’s grounds could spark an appreciation for the cycles of nature, evidenced by the trees and plants blooming and entering their own periods of repose, while the monuments encouraged reflection and remembrance.

The naturally hilly piece of land was altered by the cemetery’s landscape architects to be even more so. The many mature trees shade the walks and provide a sense of solitude. The landscape feels timeless, almost without reference point. I’ve always found it remarkably easy to get lost as I wander the little footpaths with names like Cedar Avenue, Hazel Dell, and Spirea Path. Mount Auburn is a peaceful city of the dead, and, once inside, I forget the living city beyond its walls.

For the full story by Sarah Stewart Taylor of HUMANITIES, click here.