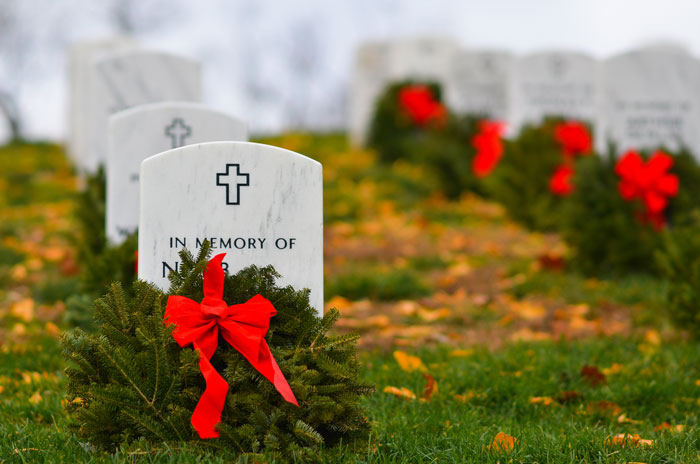 Each year, volunteers across the country donate their time to place wreaths at the headstones of veterans at cemeteries across the country, most notably at Arlington National Cemetery. The organization Wreaths Across America provide a number of volunteers with wreaths to place at their local cemeteries and this year a local woman is fundraising to add her local cemetery to the list.

Rhonda Hunt is a North Huntingdon woman leading the local Wreath Across America effort to place approximately 1,300 graves at Union Cemetery in North Huntingdon, PA. The cemetery is the final resting place to veterans who have served in the Spanish-American War, World War I, World War II and the Korean and Vietnam wars.

Hunt was motivated to join the organization after the remains of her husband’s uncle, Army Pfc. Daniel Hunt, were returned home and buried with full military honors at the National Memorial Cemetery of Arizona last December. The soldier had been missing in action for over 65 years after being killed in the Korean War.

The Hunt family was especially impressed by the turnout at Pfc. Hunt’s burial services, which included over 200 veterans, including 150 Veteran Patriot Riders who escorted Pfc. Hunt to his final resting place. “‘We were super touched by the outpouring of support from the Korean community and the veterans community,’ said Richard Hunt, Rhonda’s husband. The Korean consulate general attended the funeral as well (Funds, Napsha).”

Hunt has been holding fund raisers for the wreaths, with a goal of $19,500 to provide a wreath for the 1,300 veteran headstones at Union Cemetery. Each wreath currently costs $15 a piece and Hunt has enough funds for about 45 headstones. The wreath orders are due by November 27 and the wreaths will be placed on December 16 and remain at the headstones until January 31. If Hunt doesn’t raise enough money to provide a wreath at each headstone, she will adorn the remaining headstones with a red bow.

If you would like to assist in these efforts, you can reach Rhonda Hunt with the following information below:

“Rhonda Hunt is seeking veterans from each branch of the military to present the ceremonial wreath for their branch during a ceremony at noon Dec. 16 at Union Cemetery.

She also is seeking veterans and volunteers to help place the wreaths on the headstones of all veterans.

For the full story by Joe Napsha of TribLive , click here.