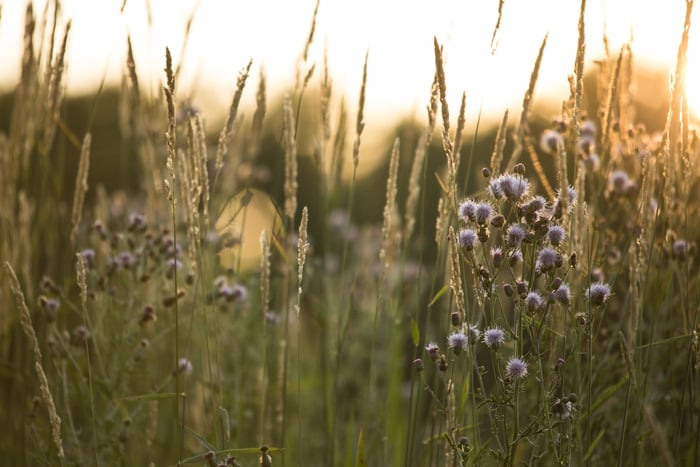 When a person is asked to envision a cemetery, many think of large headstones, in single-file rows, spread out over freshly manicured grass. Ideal and serene and peaceful. But one cemetery is just the opposite and is a historical throwback to the time when settlers were buried there.

Voight Pauper Cemetery, which is located in Otter Creek Township, Illinois, is a state-designated nature preserve. The location is a prairie cemetery for the German and Irish settlers who came to the region in the 1800s.

This was a pauper cemetery, so the families of the people buried there didn’t have money for monuments. People driving past the cemetery can’t see the headstones from the road because the land mirrors how it looked in the 1800s, with wild flowers and grass not being mowed. The only time headstones are only visible typically after a controlled burn.

14 graves have been identified in the 1 acre parcel of land, though the list was not exhaustively researched. Many of those buried there were done so around the 1850s to 1860s. The last burial was in 1896.

In 2003, the state had a study of the cemetery and determined that there were more than 100 species of plants. Kim Roman is a preservation specialist with the Nature Preserves Commission and she participated in the 2003 study. “‘The prairie vegetation has remained, because it was never plowed,’ Roman said in an interview. ‘It is permanently protected. This is what the landscape looked like when the people were buried there (Snapshot, Giuliani).'”

Illinois has identified 29 cemeteries as original prairie land, like Voight Pauper Cemetery, and are currently working to make them all natural preserves. Some people believe that leaving the cemetery unmaintained is disrespectful to those buried in the cemetery but Roman believes it helps honor those because the land is being left as it would have been in the 1800 and providing visitors a chance to look back at the region’s history.

For the full article by David Giuliani of My Web Times, click here.