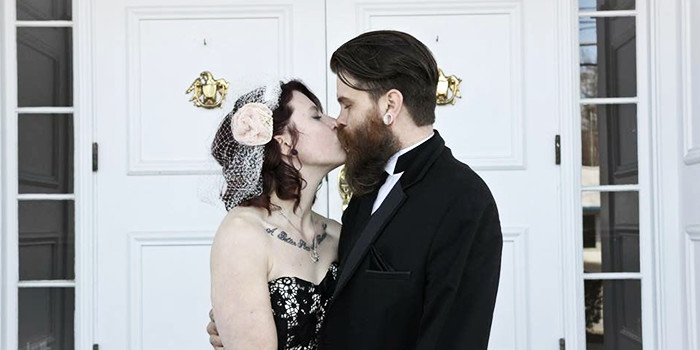 The idea of holding a wedding ceremony in a funeral home may sound strange, but it has been confirmed as a nationwide trend as Barry and Chelsea Lesnick tied the knot in an Ohio funeral home earlier this year.

“We were planning on our wedding, looking at different venues,” said Chelsea Lesnick. “We couldn’t find one that met our needs and budget,” said Lesnick. “Why not at a funeral home? So I got hold of my aunt and it worked out perfect.”

Nancy’s parents, Ray and Helen Brunner, started the business in an old farmhouse on Mentor Avenue in 1949. The business has been in their family for three generations and was known as Grandma and Grandpa’s house to Lesnick and many of her relatives.

Now, the upstairs floor is a reception area with a state-licensed bar, commercial-grade kitchen and enough room to seat one hundred and twenty-five guests. During funeral services, the room gives mourners an opportunity to have a legal drink or meal in memory of their loved one.

Sanden said the reception floor has been used to hold other non-funeral related events, including a baby shower, engagement party, first-communion celebration, wedding anniversary and a high school reunion.

There were fifty guests in attendance at Barry and Chelsea’s wedding ceremony. Chelsea Lesnick describes her wedding as being homelike and cheerful.

“The reception center is separate from the funeral home,” said Sanden. “It’s not like they (the wedding party) were standing around caskets.”

Chelsea and Barry’s wedding might have been Ohio’s first to be held in a funeral home, but it is not the nation’s first. It is uncertain when or where the United States’ first funeral home wedding occurred, but the story is that a widow and widower married in the funeral home that hosted the bereavement support group where they were introduced.

Jessica Koth, the public relations manager for the National Funeral Directors Association (NFDA) said that hosting weddings is a growing trend among the group’s 10,000 member funeral homes. In 2014, 9.5% of NFDA members had reception or community centers that could host non-funeral related events.

“Why should facilities sit empty, the members are asking themselves,” said Koth. Weddings offer another use for their facility.

Wells Greeley, owner and funeral director of Wells Funeral Homes Inc. in North Carolina, said the funeral home industry is changing because fewer people are interested in elaborate funeral rites. Greeley said cremations now make up 40% of his company’s business, as opposed to only 6% forty years ago. Weddings are now becoming a natural service for funeral homes to offer.

“It is an extension of what we do,” said Greeley. “Whether we want to be it or not, we are event coordinators already. We have to be event planners.”

Greeley recently bought a 12,000 square-foot building near one of his facilities. Since then, one hundred and twenty events have been held there; only thirty-six of them were funerals. The core business of a funeral director is caring for the dead and serving the living with the common thread being the celebration of life, which can include both weddings and funerals.

This story was originally written by James Ewinger on August 13, 2015. To read the original article and view more photos, visit www.cleveland.com.